THIS WEEK I'VE BEEN READING:

I didn't do a ton of reading this week!  I read a dystopian novel called "Cyberstorm" by Matthew Mather.  I would give it an 8.5/10.  It was really good.

Sometimes the worst storms aren't from Mother Nature, and sometimes the worst nightmares aren't the ones in our heads. Mike Mitchell, an average New Yorker already struggling to keep his family together, suddenly finds himself fighting just to keep them alive when an increasingly bizarre string of disasters start appearing on the world's news networks. As the world and cyberworld come crashing down, bending perception and reality, a monster snowstorm cuts New York off from the world, turning it into a wintry tomb where nothing is what it seems...

I"m continuing on with "The Poisonwood Bible" - but this is my one book that is not electronic, and I savor those over at least a month at a time.  Lately I am re-reading some of my favorite novels.  The one before this was "White Oleander" by Janet Fitch.

I am also half-way through with a second dystopian e-book (see a trend here?) called "The Immune" by David Kazzie and 34% through Lisa Jackson's "Left to Die".

For our Family Book Club I am re-reading "Interview with the Vampire" by Anne Rice.

THIS WEEK I ADDED TO MY E-BOOKS:

"My Brilliant Friend" by Elena Ferrante , which I purchased for my Kindle for $2.99 after reading reviews on Stacking the Shelves last week! 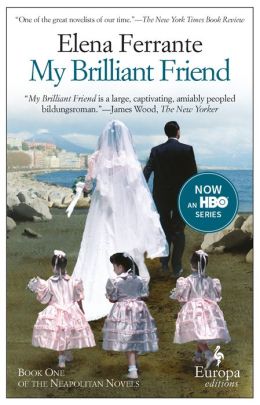 Tales from Shakespeare by Mary Lamb - free for Kindle*.

ADDED TO MY WISHLIST:

The Raven Boys by Maggie Stiefvater

Every year, Blue Sargent stands next to her clairvoyant mother as the soon-to-be dead walk past. Blue never sees them--until this year, when a boy emerges from the dark and speaks to her.His name is Gansey, a rich student at Aglionby, the local private school. Blue has a policy of staying away from Aglionby boys. Known as Raven Boys, they can only mean trouble.

Theodore Finch is fascinated by death, and he constantly thinks of ways he might kill himself. But each time, something good, no matter how small, stops him. Violet Markey lives for the future, counting the days until graduation, when she can escape her Indiana town and her aching grief in the wake of her sister’s recent death. When Finch and Violet meet on the ledge of the bell tower at school, it’s unclear who saves whom


Playlist for the Dead by Michelle Falkoff

Part mystery, part love story, and part coming-of-age tale in the vein of The Perks of Being a Wallflower and The Spectacular Now.

I'll Give You the Sun by Jandy Nelson

Jude and her twin brother, Noah, are incredibly close. At thirteen, isolated Noah draws constantly and is falling in love with the charismatic boy next door, while daredevil Jude cliff-dives and wears red-red lipstick and does the talking for both of them. But three years later, Jude and Noah are barely speaking. Something has happened to wreck the twins in different and dramatic ways . . . until Jude meets a cocky, broken, beautiful boy, as well as someone else—an even more unpredictable new force in her life

I have actually added another dozen or so to the wishlist!  When I get going, it's hard to stop.

*These books were free at the time of this posting.
**Kindle Unlimited is an e-book "rental" service, which costs $9.99 monthly