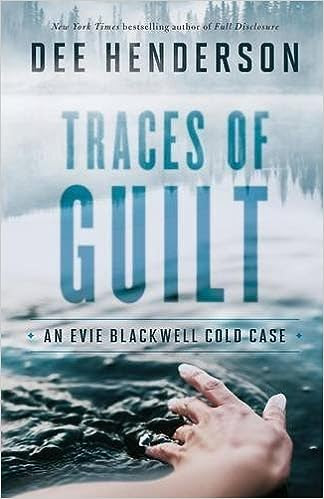 Traces of Guilt by Dee Henderson

About the author (from Goodreads) Dee Henderson is the author of 14 best-selling novels, including the acclaimed O'Malley series and the Uncommon Heroes series. As a leader in the inspirational romantic suspense category, her books have won or been nominated for several prestigious industry awards, including the RWA's RITA Award, the Christy Award, the ECPA Gold Medallion, the Holt Medallion, the National Readers' Choice Award, and the Golden Quill. Dee is a lifelong resident of Illinois and is active online.

From the back cover:
She's turning up the heat on Carin County's cold cases . . .
Evie Blackwell loves her life as an Illinois State Police detective . . . mostly. She's very skilled at investigations and has steadily moved up through the ranks. She would like to find Mr. Right, but she has a hard time imagining how marriage could work, considering the demands of her job.

Gabriel Thane grew up in Carin County and is now its sheriff, a job he loves. Gabe is committed to upholding the law and cares deeply for the residents he's sworn to protect. He too would like to find a lifetime companion, a marriage like his parents have. . . .

When Evie arrives in Carin, Illinois, it's to help launch a new task force focused on unsolved crimes across the state. She will work with the sheriff's department on a couple of its most troubling missing-persons cases. As she studies old evidence to pull out a few tenuous new leads, she unearths surprising connections. One way or another, she knows Gabriel Thane and his family will be key to the answers she seeks.

My humble opinion:  I loved this book!  *****5 Stars  I'm so excited to have found a new Christian mystery author!  I will be reading everything she's published.
A cold-case in the Midwest.  Strong female characters. A father with three grown sons all working together to set things right in their town.
Evie Blackwell is a great character.  She is driven by her work to a fault.  She is smart, determined, competitive and most importantly, she loves what she does.  I'm hopeful that Dee Henderson will create an entire series around her.
Evie comes to Carin, Illinois for vacation.  "Vacation" meaning siphoning through years of clues to help solve two cold cases that are very close to the hearts of the people of this town.  The Thane family work closely with her to unearth leads that were previously unseen.

This is a great read.  I highly recommend it.  The plot twists and turns coupled with great characters and an intriguing story-line kept me up later into the night reading.

*Traces of Guilt was given to me by Bethany House Publishing in exchange for my honest review*
at May 18, 2016

I'm linking up with Sandra for Happy Homemaker Monday!  It's been quite awhile since I've posted.  2021 was completely insane....