Let me start by saying that I really LOVED this book.  SO good! 5 stars (easy) and I would most definitely recommend it.

Now that I have that said, let me tell you what the book is and why I think it is pretty amazing.


The Storyteller's Secret, by Sejal Badani 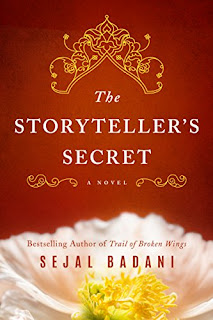 This book has great reviews on Amazon and Goodreads - but that doesn't always mean it's fabulous.  But this one definitely is.  This is also a Kindle Unlimited read. (I had KU until last night - and I finished this book with about 17 minutes to spare of my subscription!)

This author, who is a former attorney, is a very accomplished writer.  She has been a finalist for several writing awards and her books have been on best-seller lists.

This story weaves difficult subjects with strength, hope, and renewal.  The main character goes on a journey, starting as a broken woman and ending as a strong, confident woman who knows herself and her history, even the secrets.

The story is told mostly through two women, Jaya a young woman who has become severely depressed after several miscarriages and difficulties in her marriage, and Amisha, her grandmother, who lived a short, sometimes very tragic life in India.

Jaya's parents (who moved to America shortly after their marriage, many years earlier) try to be supportive, but end up making her feel worse about her life and losses.  When news arrives from their family in India, asking for Jaya's mother to come to her childhood home, she declines but Jaya decides running from her current situation is what she needs to heal.

Upon arriving in India, she meets a remarkably loveable character, Ravi, a previous family servant and best friend of her grandmother.  He tells Jaya Amisha's tale and all the family secrets that go alone with it.

My favorite part of the book is her time spent in India.  I would have liked just a bit more descriptive detail about the surrounding area where she stayed - but the book is still amazing as is.

This book held my interest, I learned things about Indian culture and history, I felt deeply for the characters and felt completely immersed in the story.  I will most definitely be picking up "Trail of Broken Wings", the author's first novel.