I read this book for the Classics Club. You can find my list of all the classic books I plan to read over the next three years HERE.

Island of the Blue Dolphins is about a 12-year-old Native American girl who lives on an island which is shaped like a dolphin. Terrible things happen to her people, many of them are killed. The rest of her tribe are brought back to America - but Karana was left stranded.

She survives the terrain, the loneliness, the weather, the wild animals. She finds a way to feed herself, clothe herself, hunt, fish, and even put a roof over her head.

I love this book because Karana is brave. She is no-nonsense and does what needs to be done to survive. Her only company is the animals of the island, a couple of them she keeps as pets. Her best companion being a wild dog. 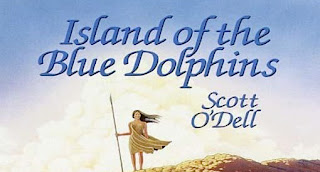 I remember when I first read "Island of the Blue Dolphins". I was so amazed that a young girl, just like me, was able to take care of herself and actually thrive on a deserted island. Re-reading this children's classic was just as magical.

Surprisingly, I never knew that this book is actually based on a true story! A Nicoleno Native American girl was left alone on San Nicholas Island in the 1800s. She was alone for 18 years!

Here is a short video exploring the island: